What is hyperbaric oxygen therapy?

Your blood delivers the high concentrated oxygen throughout your body enhancing the nature healing process. The increased pressure changes the normal cellular respiration process and causes the oxygen to dissolve in the blood’s plasma stimulating growth factors and stem cells that actually restore and build new blood vessels.

Why do you use pressure and not just breathe in higher volumes of oxygen?

Pressure changes the way we absorb oxygen. We can see an example in nature. At sea level our lungs can absorb a normal amount of oxygen from the air. At higher altitudes, the pressure drops and the lungs can’t absorb as much oxygen from the air. This is why there is altitude sickness on the top of Mount Everest and why oxygen masks drop in an airplane at high altitudes – to increase the oxygen content due to the lack of pressure. The exact opposite happens at lower altitudes (below sea level). There, the pressure is greater and now the lungs can more easily absorb the oxygen, and at a greater volume. When you combine the high pressure and a high concentration of oxygen it is the best combination for your body to absorb the most oxygen.

Do doctors use hyperbaric oxygen therapy?

The chamber manufacturer we use in the Fresh Start clinic is approved through the FDA as a Class II medical device. The mild portable chambers are officially cleared for the treatment of oxygen deficiency due to Acute Altitude Sickness aka acute mountain sickness (AMS) but through clinical trials and testimonials have been used and works as treatment for various medical conditions from cancer to strokes.

Is this a new technology?

No. More accurately it is an old technology revisited in our modern world.

Hyperbaric chambers have been around since the 1600s and used clinically, since the mid-1800s. A British clergyman named Henshaw built the first well-known chamber called the domicilium, which was used to treat a multitude of diseases.

The idea of treating patients in a high pressure environment was carried on in 1879 by a French surgeon named Fontaine. He built a pressurized, mobile operating room. In 1928, another medical specialist, a professor of anesthesiology, Dr. Orville Cunningham built an entire pressurized hospital that could reach three atmospheric pressures.

After World War I, the U.S. military continued to develop hyperbaric oxygen therapy for the treatment of deep sea divers with decompression sickness. In the 1950s more clinical trials uncovered more benefits of medical hyperbaric chambers. In 1967, the Undersea and Hyperbaric Medical Society was founded to research more about the physiology and medicine of commercial and military diving. Today it is becoming more commonly used in medical hospitals as an alternative treatment and in combination with other treatments to fight various medical conditions and diseases.

What is the difference between regular and mild hyperbaric oxygen therapy?

Is it safe for children?

Yes. While there are minor cautions for anyone using the hyperbaric chambers, overall, hyperbaric oxygen therapy is extremely safe.

At the start of the treatment, some patients experience a sensation similar to that felt while flying and/or landing in an airplane. As pressure builds, it is common to feel pressure in the ears. At the end of the treatment, as the pressure is released, the ears "pop" automatically. Most patients rest comfortably throughout treatment. Many read, sleep or listen to music.

What medical conditions does it treat?

Conditions treated that are commonly covered by Insurance and Medicare:

Can I benefit from the hyperbaric chamber if I don’t have a medical condition?

Yes. Healthy clients have found an increase of mental clarity, more energy, and a higher sense of well being. We find there aren’t many disadvantages to more oxygen even for people in good health. Athletes use mild hyperbaric to prepare for events like football and track. Marathon and triathlon participants use hyperbaric treatments before and after the race to perform better and recover faster.

How should I prepare for my first treatment?

Wear clean, loose cotton clothing. Avoid cosmetics, perfumes, deodorants, wigs or jewelry. A hyperbaric treatment is intended to increase oxygen flow and absorption. Therefore, patients are advised not to drink alcohol or carbonated drinks for four hours prior to treatment. In most cases, patients should give up smoking and any other tobacco products during their treatment period, as they interfere with the body's ability to transport oxygen.

How long does each treatment last?

The typical treatment in the mild hyperbaric chamber is 60-90 minutes.

How many treatments do I need?

That depends on your medical condition and the results you hope to find. This decision is also based on the patient's diagnosis and their body's response to the therapy. Most wound healing patients receive one treatment per day for 20 – 30 days. In general, patients with chronic conditions usually receive a longer series of treatments than patients with acute conditions. To see results, a patient should do at least three dives per week for a couple weeks to start with. Once a month for maintenance.

Are there any risks or side effects?

Under proper supervision, the risks of hyperbaric oxygen therapy are very minimal. The most common side effect is ear pain caused by the change in pressure.

Conditions that have seen results in clinical trials and testimonials: 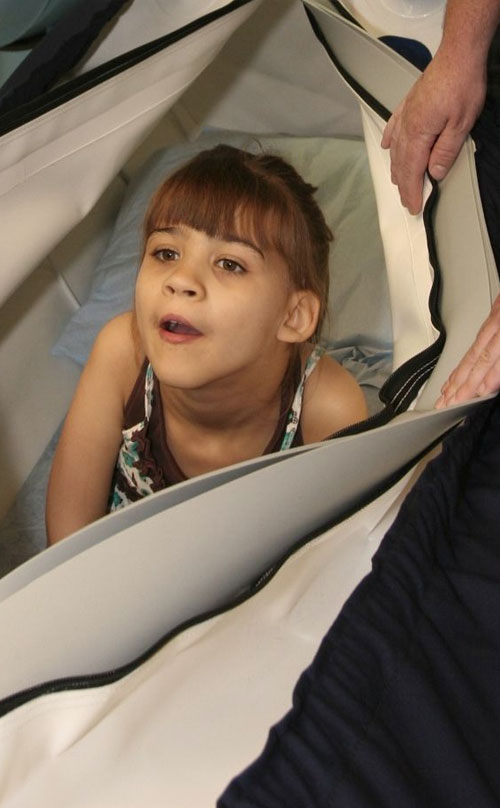